skip to main | skip to sidebar

A good but blurry shot of my hair 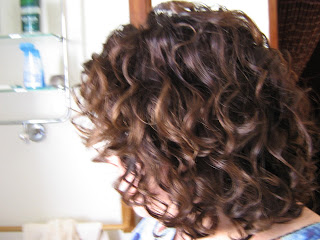 Thought I'd post this since it's the first real photo of my hair that I've taken that's halfway decent. This is how I like my hair to look (minus the blur, of course).

So many people seem to have luck with gels, and I just don't. LaBella "Lots of Curls" gel was all the rage at NaturallyCurly.com recently so I bought some. Great hair the first time I tried it -- I thought I'd really found the answer to my curl problems. Yesterday and today, though, I am living in Frizz City. I think I've figured out that my hair can only take so much glycerin before it chokes. I can't use Curl Keeper or Lots of Curls more than one day. Good to know, I guess.

Let's see, then. I cannot use magnesium sulfate or glycerin. And now, frankly, I'm wondering if jojoba oil is another culprit. I'm going to experiment with that next.

When I first went into this whole Curly Girl thing, I expected to find a product or two that worked for me and then just use that forever. It has not turned out that way at all. Weather is a huge factor -- I was able to use curl cremes back in December and January when it was very cold outside. Now, however, they are too heavy for my hair. So, I'm at a bit of a loss about what to feed my hair. I'm pretty sure I need to go light but if I go too light, I don't get enough control.

No Lots of Curls tomorrow. In fact, no glycerin tomorrow or maybe the day after.

I want smooth curls. I wish I knew how to get them.
Posted by Sage Vivant at 9:42 PM No comments:

More than one way to curl a hair

A member of NaturallyCurly.com has posted three really helpful videos showing the routine she recently learned from her Deva-trained stylist. Several steps are quite different from what I do or what I've learned is "right." And so what this proves is that there is no right or wrong way to style curly hair -- only the way that works for you.
Posted by Sage Vivant at 10:08 PM No comments:

Email ThisBlogThis!Share to TwitterShare to FacebookShare to Pinterest
Labels: video

My hair has never been shiny. Not surprising, as the rough cuticle of curly hair makes shine elusive for so many of us.

But then I learned about this totally natural stuff called cassia obovata. It's a type of henna but without the coloring properties. Its main purpose is to condition and impart shine. It's also good for the scalp, but for me, that's just extra!

I used some today. The process is not simple but it's not as involved as with henna. You just mix some up with water until it's the consistency of pudding and then slather it all over your head. It's good to massage your scalp with it to really get it everywhere.

It's messy. No doubt about it. But it doesn't stain like henna does, so you don't have to worry about leaving permanent traces of your hair treatment everywhere. I put mine on in the shower (you can apply cassia to wet or dry hair, as long as it's clean). Then, I wrapped my head in plastic wrap, put on a shower cap, and then a towel on top of everything. The idea here is to create some heat.

You have to leave it on for at least two hours. I left it on for three hours because I'd read that gray hair (which is the predominant color of my roots) picks up a kind of golden color from cassia if you leave it on long enough. My hair is still drying at this moment but I don't see that my roots look any different. I'll be able to judge better tomorrow, though.

Rinsing this stuff out is a small ordeal but not horrible. I'd read that it helps to dunk your head into a sink or bathtub of water just before you're ready to rinse, so I did that and I do think it helped the cassia come out of my hair under the shower more easily. But as I rinsed, my hair felt dry and brittle (which I was warned would happen), so I just kept doing conditioner washes Suave Naturals Tropical Coconut until it felt better. And then, just to make sure my hair got all the moisture it needed, I applied some Aubrey Organics Honeysuckle Rose conditioner and let it sit for about three minutes. Then I rinsed just about all of it out. Normally, this conditioner packs a wallop but still my hair felt somewhat dry, so I used a little Jessicurl Aloeba as a leave-in, scrunched some water out, scrunched-dried with my Curl-Ease towel, and let my hair air-dry.

It's a little soon to know whether I got more shine, but I think this is another effect I'll best evaluate tomorrow. My hair still has about another 15 minutes to go before it's completely dry. I'll report back when I have a verdict!
Posted by Sage Vivant at 5:35 PM No comments:

It's all about curls

After discovering that curls can be nurtured into fabulousness instead of frizz, I began my quest to cultivate healthy, moisturized hair. I don't use anything with sulfates or silicones, and like my hair at last! This blog is one way I am indulging my obsession.